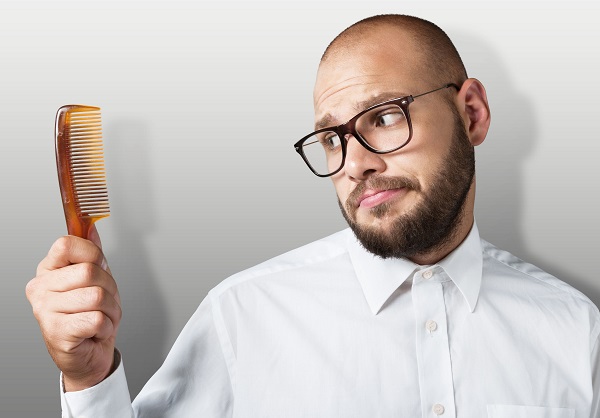 What will you find here?

Did you know that approximately 80% of men and 50% of women will experience hair loss during their lifetime? With so many hair care products available, it’s surprising that the figures are still high. Nonetheless, hair loss is an issue worth considering before settling down with that lovely partner of yours.

Perhaps solace can be found in the fact that only a tiny percentage of the population experiences complete baldness due to hair loss. Most people lose hair along their hairline or in specific areas of their scalp. People who suffer from hair loss due to non-natural causes, such as accidents, must also be mentioned. There are various reasons why people might lose their hair. Age, hereditary baldness, cancer, childbirth, illness, damaging hair care, strenuous hairstyles, scalp infections, and sexually transmitted diseases are just a few examples. The condition known as Alopecia areata is a significant cause.

Hair on the scalp is held in place by hair follicles which are tunnel-shaped structures in our skin. Alopecia areata is a disease that occurs when the body’s immune system attacks hair follicles, thereby causing hair loss. With about 1 in 50 people at risk of experiencing Alopecia areata in their lifetime, there is little wonder that there are so many possible solutions. Among these, the most researched in recent years has been Hair Transplanting.

What is Hair Transplanting?

Hair transplantation has become a popular alternative in recent years, with the general public becoming increasingly concerned about how safe it is. Hair transplantation is a surgical procedure that involves transferring hair follicles from one area of the body to another. The donor site is the part of the body from which it is removed, while the recipient side is the balding part of the body where the hair follicles are implanted. Hair follicles in the skin are taken from areas of the skin that are resistant to baldness and transplanted to the affected areas in this procedure. These hair follicles have been grafted (this involves surgically removing a living tissue from one part of the body). Hair transplanting is quite different from grafting, though, since the tissue being collected is just a strip of skin instead of skin grafting where both the dermis and epidermis are affected.

Hair transplanting is a procedure that has proven to be extremely useful in restoring eyebrows, eyelashes, chest hair, and beard hairs and even in the filling of bald spots left as a result of scars. By doing this, the operation aims at mimicking the natural hair orientation of the patient. With about a 99% success rate, hair transplanting has proven to be a viable solution to the problem of hair loss. Nonetheless, it would be known to have its pros and cons. The significant advantage would be its high success rate and the guarantee of hair growth in otherwise bald or thinning places. This solution also gives permanent results once completed; you’ll never have to lose your transplanted hair ever again. Also, another significant advantage of this procedure over others is that the result is as natural as it could ever have been, fitting seamlessly into the organization of the patient’s hair structure. And unlike most patients would worry, the transplanted hair would not need any extra care compared to what would be required in the case of entirely naturally grown hair. After the surgical operation and healing stage, the affected area can be treated the same way as the other parts of the body.

However, the cons to this procedure come from the apparent fact that it is a surgical procedure and hence comes with all the inconveniences of one. These inconveniences would include financial constraints and the general fear of going through any such process as would require surgery. Luckily though, this fear is easily overcome by the reassurance of quality service in the medical institution. This will be addressed shortly. Another major con/disadvantage that could be experienced as a result of going through such a procedure is the recovery time. . Hair transplantation is unquestionably a surgical procedure, with a recovery time ranging from 10 days to 3 weeks. The conscious effort would be required during this recovery period to avoid impeding the healing process. This could include refraining from pulling or tugging at your hair, refraining from itching (which would be very tempting), and, most importantly, refraining from scratching the affected areas. Direct sunlight and unusual sleeping positions would also be things to avoid.

It is also worth noting that hair transplantation is best suited for people over the age of 25. It is because possible areas of baldness or thinning would be visible at this stage. We certainly don’t want to return to the hospital after five years to cover new ground.

With all of these in mind, it is unquestionably necessary to carefully consider the clinics where you would like to have your hair transplantation procedure performed. Among the factors to consider are the financial budget, hospital ratings, general healthcare, and the disposition of the staff, among others. Taking all of this into account, here is a list of the top three hair transplant centers in Manchester:

With a rating of 5.0/5.0 from 70 Google reviews, Skalp UK, located at 53 King St, Manchester M2 4LQ, United Kingdom, offers itself as the best hair transplant clinic in Manchester, UK. With a team of highly specialized doctors, their services are highly rated by all who have patronized them. With a suitable location within walking distance of main bus and train stations, Skalp UK boasts of above ten years of working experience. They also offer free consultation services with exceptional customer service. You can visit their website at scalp.com/Manchester-clinic.

Vinci Hair clinic boasts a rating of 4.8/5.0 from 101 Google reviews. They are located at 49 Piccadilly, Manchester M1 2AP, United Kingdom. Vinci Hair Clinic identifies itself as the most prominent hair transplant clinic globally, with over 100,000 satisfied customers across their clinics worldwide. Also notable are their high-value customers, including celebrities like Daniel Koek, Stephen Purdon, and the famous Julius Bjornsson from the Game of Thrones series. You can check them out at vincihairclinic.co.uk.

Having a review rating of 4.9/5.0 from 36 reviews and located at 82 kings street, Manchester M2 4WQ, United Kingdom, Harley Street Haircare is a place to consider. They have more than eight clinics in the United Kingdom and offer a free consultation. As awarded by whatclinic.com, they are rated 5-star and meet up to demands. Their website is hair-transplant-clinics.co.uk.

In conclusion, you can expect exceptional service from any of the clinics listed above. However, it should be noted that hair transplantation is an expensive procedure that can cost thousands of dollars. And, while it is arguably the best, other hair recovery procedures can be considered for financial reasons. In any case, permanent hair loss is a thing of the past.

Fue Hair Transplant: What Is It, Cost, And More

DHI Hair Transplant: What Is It, The Cost, And More

Fue Hair Transplant: What Is It, Cost, And More

DHI Hair Transplant: What Is It, The Cost, And More

Reviews about Capilclinic in UK and Turkey

Reviews about Capilclinic in UK and Turkey