Athletes who have noticed that their hair is becoming noticeably thinner on top should consider the possibility that the nutritional supplements they are taking contribute to the worsening of their condition. According to the findings of the Belgravia Centre, certain types of protein shakes are to blame for the increased levels of testosterone in the blood, which are related to hair thinning in men.

It is possible for certain protein shakes and powders to contain substances like creatine and inorganic growth hormones, both of which are thought to have a role in the balding cycle. Using big weights and working out intensely raise testosterone, a hormone crucial to muscle growth and fat loss. It would seem, however, that consuming protein shakes that combine these muscle mass-promoting chemicals can cause T levels to skyrocket to an even greater extent.

Whoever has a genetic background of androgenic alopecia or is genetically susceptible to baldness should be concerned about the implications of this finding. An enzyme is responsible for the breakdown of testosterone, which produces a substance known as dihydrotestosterone (DHT).

Because DHT inhibits the creation of new hair follicles, some men will experience regular thinning and falling out of their hair throughout the normal shedding process. It is important to point out that protein shakes are not the cause of hair loss; nonetheless, since some encourage an increase in testosterone levels, they may hasten the progress of balding.

What Are Protein Shakes?

Powdered protein is the main ingredient in protein shakes. Eggs and milk are the most common sources of this protein, although it is also possible to obtain it from plants like soybeans and rice. Components such as artificial flavors, thickeners, sugar, vitamins, and minerals may also be present.

In most instances, one scoop will provide you with 10–20 grams of protein. Protein powder is easily blended into a drink with milk or water, or you may incorporate it into your go-to smoothie recipe.

How Does Protein Shakes Work? 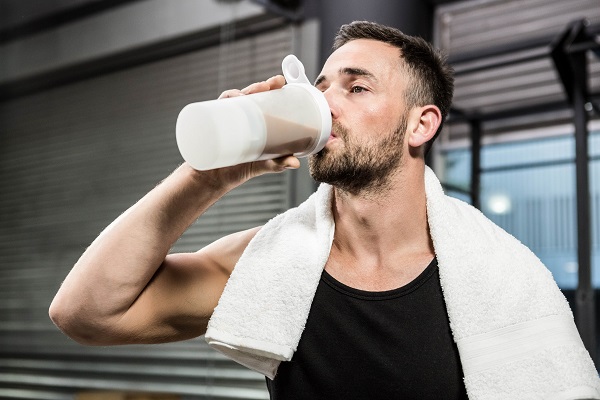 After strenuous workout sessions, athletes and fitness trainers who train daily feel muscular fatigue and micro tears in their muscles. Following exercise, muscles require more than just a large quantity of protein in a simple form to digest because research has shown that muscles are constituted of protein.

Compared to other forms of protein supplementation, such as capsules, the absorption rate of protein powder into the blood and subsequent distribution throughout the body is the quickest. In addition, it contains the largest quantity of leucine, which is an amino acid that is essential for the building of muscles.

The fact that protein powder is so satisfying is one of the reasons why studies recommend including it in diets for people trying to lose weight. A decrease in appetite will result in a lower total daily calorie consumption. In addition, it speeds up the metabolism, which in turn aids in burning more calories, preserving muscle mass, and the reduction of the risk of heart disease.

What Exactly Is the Connection Between This and Protein Shakes?

When it comes to encouraging healthy hair development, proteins, amino acids, and essential nutrients are absolutely necessary. As reported by medical authorities, regular use of protein shakes has been shown to hasten the progression of male-pattern baldness. They mention that some of the components in protein drinks are inorganic hormones like dehydroepiandrosterone (DHEA), also called androstenolone, and creatine. These additives’ primary function is to boost the amount of ‘free’ testosterone produced by the body, which, in turn, encourages mass muscle development.

Because of this rise in “free” testosterone, there has also been an increase in the level of DHT. These additions to growth hormones are not necessarily dangerous in and of themselves. On the other hand, the procedure might proceed more quickly in people genetically prone to develop male-pattern baldness.

What Action Should You Take?

A good place to start for guys experiencing hair loss is to stop consuming protein drinks that include growth hormones like creatine and DHEA. Instead, these should be substituted with natural protein sources like chicken, eggs, and fish. Even though athletes use nutritional supplements, there is evidence to suggest that the different kinds of exercise in the fitness routine may also lead to hair loss.

Specialists advise that people who want to keep their bodies fit and their hair healthy should look for different protein shakes. Also, try to increase the amount of aerobic activity you do as part of your workout routine.

If you are finding that you are losing your hair, it is highly unlikely that the protein that causes the problem shakes you consume. One possible cause could also be the use of hormone-boosting medications. You should make an appointment with your primary care physician as soon as possible to tackle any underlying issue properly.