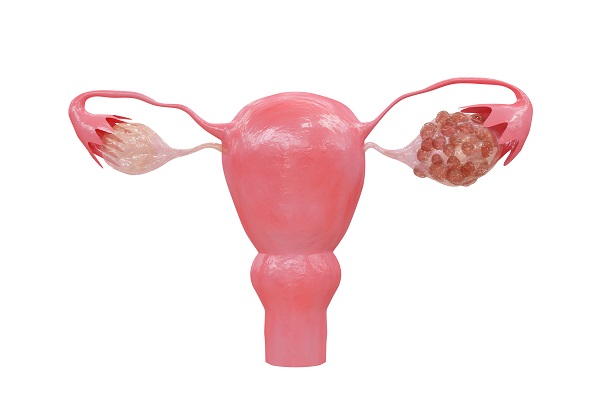 PCOS, also known as a polycystic ovarian syndrome, is a hormonal condition that can affect approximately 12% of women in the U.S who are of reproductive age. Male sex hormones known as androgens are produced in excess as a result. This results in symptoms such as weight gain and irregular menstrual cycles.

Hirsutism, often known as abnormally increased hair production on the chin and face, is another sign that many individuals believe is associated with PCOS. However, PCOS can also make your hair thinner, and in some instances, female pattern baldness might result from PCOS. The following information will give you the knowledge you need to understand why PCOS triggers hair loss and how to cure it.

Is Hair Loss Associated With PCOS?

These abnormally high amounts of metabolite dihydrotestosterone (DHT) and testosterone can cause the following symptoms and conditions:

Why Does Polycystic Ovary Syndrome Cause Hair Loss?

Hyperandrogenism is the medical term for the condition that occurs when a woman’s body produces an increased amount of androgens (the male sex hormone). Androgens cause an increase in the amount of hair that grows in the pubic and armpit areas. Women with PCOS tend to have more masculine traits, including abundant hair in areas such as the abdomen, face, neck, and chest.

Dihydrotestosterone, often known as DTG, is among the androgens that can attach to the receptors on your hair follicles when progesterone is absent from the body. Because of the damage that DHT does to the hair follicles, it is no longer viable for healthy hair to develop and flourish. This condition is also known as female pattern hair loss.

How Does Hair Loss Cause by PCOS Appear?

How To Treat Hair Loss Caused by Polycystic Ovary Syndrome

PCOS-related hair loss and the core hormone imbalance need to be addressed during treatment for this type of hair loss. The following are six potential treatments for hair loss caused by PCOS:

Hormonal birth control pills: Using birth control tablets can result in decreased levels of androgen, which can help halt the progression of hair loss. In addition, birth control may alleviate some other symptoms of PCOS, such as excessive hair growth on the face or body, acne, and irregular menstrual cycles.

Spironolactone: Spironolactone is a drug that can only be obtained through a doctor’s prescription and is classified as an anti-androgen. This medication’s off-label usage is common for treating hair loss because of its ability to inhibit the impact of androgens. It is usual to take this medication in conjunction with birth control tablets.

Minoxidil: An example of a topical drug is minoxidil, more generally known by its brand name, Rogaine. It is the only medicine approved by the FDA to treat female pattern baldness. It achieves this by expanding the size of the follicles and lengthening the time your hair spends in each development phase.

Hair transplant: The most invasive treatment for hair loss caused by PCOS is a procedure known as a hair transplant. This is a medical technique in which the surgeon will remove a portion of your scalp that has healthy hair development and then transplant these hairs into parts of your head where you are experiencing hair loss.

A variety of home therapies may assist in reducing androgen levels, limiting their influence on hair. Some of this therapy includes:

You should consume aloe vera juice since it helps flush the body of toxins, restores hormonal harmony, and makes the body more sensitive to insulin. The ovarian steroidogenic function status can be restored by aloe vera. When used topically, aloe vera heals and calms damaged hair, making it easier to manage. Aloe vera, according to the findings of several studies, is effective at combating PCOS-related hair loss from the inside out.

Hair loss is one of the symptoms that can accompany polycystic ovary syndrome (PCOS), along with other symptoms such as irregular periods, increased hair growth around the body and face, and weight gain. Several different therapies, ranging from hormonal contraception to topical drugs to surgery, can help lessen the amount of hair loss you experience. Utilizing several other treatments will almost certainly result in the most favorable outcomes.