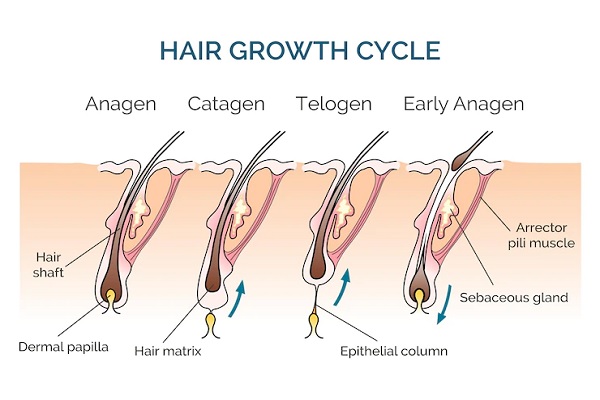 Keratinous fibers, which make up hair, are produced by follicles all over the body, except for the palms and soles, where there is no hair. When a person is born, they have a set number of follicles. The process of growing new hair is dynamic and can be broken down into four separate Hair Growth Phases . The length of these various stages and how they appear in different body regions are influenced by the duration of the multiple stages relative to one another.

Let’s take a more in-depth look at these four hair growth phases, the timeframes for each one, and why it’s vitally crucial for some of the hair to fall out while the process continues.

During this phase, the hair will grow at an average pace of approximately one-half inch per month. This growth is known as the active phase. The time spent in the anagen phase is directly proportional to the maximum hair length, and that measurement can range anywhere from 18 – 30 inches for most people. These  hair growth phases typically occur anywhere from two to six years apart.

After the growth phase of your hair is complete, it will enter a phase of transition called the catagen phase. To further clarify, what experts mean by “transition” is that this is the point in time when your hair will start the cycle of falling out.

Although it can sound horrifying, the science around it is pretty fascinating. Your body sends a signal to the hair, telling it to stop developing, and in response, the hair follicles react by contracting slightly and separating from the blood flow. This process causes your hair to become thinner and less dense.

When you hear the word “detach,” you probably immediately think that this means your hair will start falling out in large amounts and that you will be bald for the rest of your life. The great news is that even while it separates from the scalp, the hair typically does not fall out till new hair starts to push it out and cause it to get dislodged.

The telogen phase is a period of rest that the hair enters once it has finished detaching from the scalp. This is because your thinning hair will remain on the head for three to five months before a new hair eventually pushes it out.

This stage is by no means easy to complete. The term “telogen effluvium” was used by researchers at the Harvard Medical School to characterize a particular ailment. This word is a fancy term describing the process in which a change in the body system or an unforeseen stressor causes the telogen phase to progress more quickly. In contrast to the average loss of 100 hairs per day, a person suffering from telogen effluvium may experience a loss of over 300 hairs daily.

When your hair finally reaches the exogen stage, it has already undergone many changes. The old hair separates from the scalp as the new hair comes in, and it then starts falling out in more significant numbers as the new hair takes its place. While you are most likely to notice this after you have combed your hair, you may also see clumps of hair in the shower drain or while you are styling your hair.

The length of time a hair cycle takes might vary significantly from person to person. The reduction in the size of the hair follicles that occurs in bald men makes it more difficult for new hair to form.

According to recent research findings, an individual’s genetics are responsible for this stage reversal. Even if you have no control over whether or not you will be afflicted by it, you can prevent it from becoming worse by seeking treatment.

In what ways does treatment for hair loss influence these hair growth phases?

Finasteride and minoxidil are two medications approved by the FDA to prevent further hair loss.

Let’s briefly discuss DHT before moving on to the “how” part. DHT is a masculine sex hormone that usually assists in developing things like facial hair and muscle growth in the body. It starts by attaching itself to the hair follicles and gradually reduces their size until they cannot produce new hair follicles. DHT levels tend to be abnormal in males who have a condition known as male pattern baldness.

However, DHT is not the only factor in this process. It does this with the assistance of a companion enzyme known as 5′-reductase, just like every other villainous character does. Finasteride prevents 5′-reductase from ever developing in the body. Because of this, dihydrotestosterone (DHT) cannot receive the boost it requires to reduce the size of your hair follicles.

Minoxidil, on the other hand, functions in a slightly different way. It helps increase the volume of anagen follicles (note that male pattern baldness occurs when the follicles get smaller) and reduces the time the telogen phase continues.

This indicates that your hair is becoming healthier and growing out at a faster rate. It also implies that you can experience something referred to as “minoxidil shedding” during the first few weeks after you begin utilizing it, but that is your older, thinner hair falling out to make room for new, healthier hair.

The Hormone That Leads to Hair Loss

An enzyme known as 5-alpha reductase converts testosterone into the hormone dihydrotestosterone, sometimes known as DHT. It is also possible to produce it from DHEA, a hormone more prevalent in females. The skin, as well as the hair follicles and the prostate, both contain DHT. Hair loss is brought on by both the acts that DHT performs and the susceptibility of follicles to DHT.

In addition, DHT affects the prostate. The prostate can’t develop normally in the absence of DHT. A man can get benign prostatic hypertrophy, often called enlarged prostate, if he has excessive DHT in his body.

Although the rates at which people’s hair develops and falls out are unique, the stages that everyone passes through are the same. Because of this, awareness of each phase of hair development makes it much simpler to assess your personal hair loss and gives you a better understanding of how hair loss therapy could be of assistance.