If I Get Gray Hair, Won’t I Go Bald Anymore? 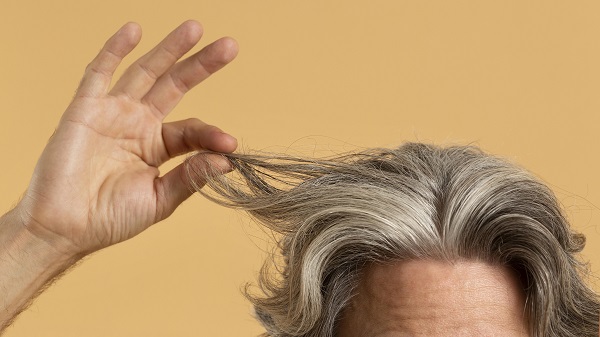 Many people have been convinced that the more they age and become grayed hair, the less likely they will go bald. However, it is unfortunately how they have been tricked into believing such a myth, even when it has no evidence or substance to back it up.

But we will see shortly, hair loss and gray hair have virtually very little in common. Instead, their relationship appears to be based on direct proportionality. That is, the more one’s hair grays, the more susceptible they are to baldness. The closer one gets to have gray hair, the more their hair falls off. Gray hair and hair loss can instead even be associated with age, which makes them both inevitable. Nevertheless, this too should also be treated as only an assumption.

We don’t want to fill your ears with assumptions, so let’s get to the facts. To debunk this myth, let’s take a quick look at the origin/causes of gray hair. This will be followed by a more in-depth look at hair loss and its causes. This method aims to lay forth the facts so that an objective conclusion can be reached.

People’s perceptions of gray hair vary widely; some see it as a mark of distinction, while others see it as a sign that they’re becoming older. In the end, gray or white hair (if you’re lucky enough to have it in your older years still) is pretty much an inevitable gift of nature to all.

A great deal of time and effort has been expended by scientists in their quest to discover what causes gray hair, and the following have successfully been uncovered.

In the hair follicles, melanocyte cells create melanin, which gives hair its color. Researchers have found that damage to melanocytes occurs over time, causing them to become ineffective at producing melanin. Melanin production may also be disrupted due to DNA damage and increased hydrogen peroxide levels in the follicles. This lack of melanin results in gray, white, or silver hair as a new hair grows in.

It’s not uncommon for folks to go gray as early as their teens. If your parents started experiencing graying hair at their prime, you’re likely to do the same, too. It’s easy to hide up your grey locks with one of the many hair dyes on the market if you don’t find gray hair particularly appealing.

Having discussed the possible root cause of gray hair, let us look at the cause of hair loss and then juxtapose to see if there’s any relationship.

Alopecia (hair loss) can simply affect the scalp or the entire body, and it can be transitory or long-lasting. Heredity, hormonal changes, medical disorders, or age are possible causes. In general, males are more likely than women to lose hair on their heads, but it can happen to anyone.

The term “baldness” refers to excessive hair loss from the scalp. Age-related hair loss is the most common cause of baldness in men and women. Some people opt to leave their hair loss untreated and unhidden, while others want it hidden. Then there are those who opt for a treatment to stop additional hair loss or re-grow it.

Here are some common causes.

Genetic hair loss, otherwise known as pattern baldness, is the most prevalent cause of hair loss in both men and women genetically. Androgenic alopecia is the medical name for this hair loss type, and it occurs in both males and females.

It means you have genes that cause your hair follicles (where each hair grows from) to diminish and finally stop producing hair. Shrinking can start in your twenties, although it usually starts later, usually when you get older.

The earliest sign of hereditary hair loss in women is usually thinning. The first indicator of genetic hair loss in men is a receding hairline or bald area on the crown.

Hair loss due to age

Because hair growth slows down as we get older, most people experience significant hair loss when they grow old, while others can survive through it. Once the hair follicles have stopped producing hair, the amount of hair on our scalp begins to weaken and fall out. The color of one’s hair also begins to fade as well.

When the body’s immune system attacks hair follicles (the structures that hold the hair in place), it results in hair loss, which is known as alopecia areata. Hair loss can occur anywhere on your body, including your scalp, the inside of your nose, and the back of your ears. Some people experience a loss of their eyelashes or brows.

Hair loss due to Hormonal imbalance

Polycystic ovarian syndrome (PCOS) is a typical cause of this hormonal imbalance (PCOS). It causes cysts to form on a woman’s ovaries and other signs and symptoms, which may include hair loss in some cases. Some birth control pills can induce a temporary hormonal imbalance if stopped abruptly. The hair on the scalp of women who suffer from a hormonal imbalance can thin or, in severe cases, fall out completely.

When the above is considered, it will be apparent that hair loss and gray hair are completely different phenomena with almost no correlative relationship. On the contrary, if they have anything in common, then it is age. The more one ages, the more they are likely to grow gray hair, and the more their hair falls away.

This can then lead us to dismiss the claim that one may not experience baldness as one grows old. We think you should also dismiss that claim if you still hold to it peradventure.

Everyone will eventually develop gray hair.  The same is valid for hair loss. While both are unavoidable, technological advancement has made it possible for people to restore their lost hair. So, if you are concerned about your appearance, this may be an option for you.