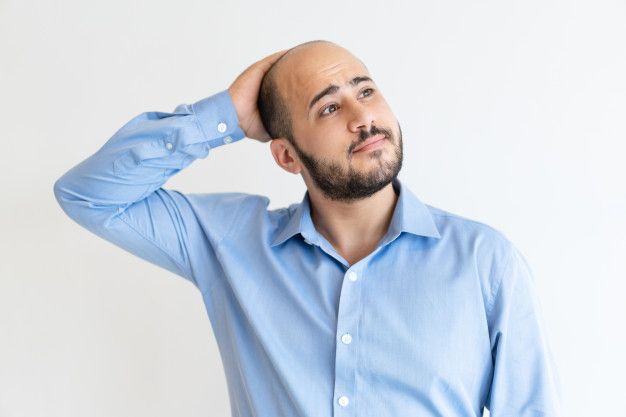 In Spain, half of men are diagnosed with alopecia after reaching 50 years old. A percentage that gradually increases, as indicated by several recent studies that quantify the total affected by this problem by 60% at 60 years old, by more than 70% at 70 years old and 80% at 80 years old.

Nevertheless, it is during adolescence that many people start to suffer the consequences of an ill that begins to turn visible through the loss of capillary density, which will later become a progressive and indiscriminate fall of hair follicles, and finally leads to the emergence of the first bald.

Baldness, if not treated, can spread to the entire scalp surface, so it is vital to put yourself in the hands of a hair health specialist at the slightest alert that exposes an unusual fall of hair in daily routine.

Being that said, let’s see what the most common types of male alopecia among men of all ages are. Currently, the medical community has classified around a hundred different alopecia to which we are all exposed to.

It is the most common among men representing the great majority of cases, who go every day to hair health specialized clinics. Especially widespread among men, it usually develops as of 30 years old; moment in which the ones suffering it start to realize how their hair grows increasingly weaker and in smaller quantity, to finally begin to fall without further regeneration.

Normally it starts to develop in the crown and the entrances areas, to spread to other areas of the scalp afterwards.

This type of alopecia starts to grow in any part of the scalp, extending to, if it is not cured before, occupy the entire hair.

Little by little, the hair grows weaker and slower, until it stops growing where alopecia appears.

This type of alopecia is the second most common among men. It is also the one that shows up at an early age, being common that some teenagers or young boys in their twenties go to the clinics after realizing a hair loss in some specific areas.

While in many cases it appears as a result of an inheritance, in others it shows as a consequence of stress or anxiety. When this occurs, it’s enough to analyze the root of the problem and solve it so as to repopulate the affected area.

This type of alopecia appears as a consequence of an ill, a treatment or an injury. In these cases, the scar left by the disease damages the follicles and their growth areas in the scalp.

This type of alopecia is more usual in women than in men, although it can also occur in some males. The cause of this alopecia is the hormonal change and the way it shows, the progressive fall of hair, mostly eliminated in the frontal area.

It is the alopecia that advances more slowly requiring the use of strengthening treatments to stop it. When this is not enough, as with the rest of alopecia, the best solution is to opt for a hair transplant.

Besides these alopecia, it should be noted that some baldness appear along with traumas or rare diseases so, once again, we insist on the need to put ourselves in the hands of professionals in medicine immediately after we see that on the pillow, when combing or in the shower the amount of hairs coming off our scalp is much higher than usual. I mean, to those 100-150 follicles that we lose and regenerate daily.

How to put an end to male alopecia

No matter which alopecia is diagnosed, it is important for you to know that there is a solution for your problem. This, of course, will depend not only on the type of alopecia you have, but on the degree of its growth and the speed at which you start to put an end through treatments, interventions and care that will be recommended when you go to a medical center for help.

And, although there are people who, changing their medication, modifying their diet, decreasing their levels of stress or anxiety or using some home remedies manage to improve their image significantly, the truth is that the vast majority need to undergo a regeneration treatment or a hair transplant operation to recover your image before alopecia.

In this regard, it should be noted the big help of treatments such as those that rely on stem cells to regenerate hair follicles, strengthen hair and cause the birth of follicular units that had stopped doing so through the blood plasma enrichment. A treatment where the patient’s own blood is oxygenated to firstly benefit the circulation and then, the follicle feeding, which combined with the hair graft offers lifelong solutions.

Because if there is a quick and definitive solution, it would be the hair transplant – through a hair graft of follicular units from a donor area to a recipient area where the hair had stopped growing – in order to repopulate the scalp. A thing that is possible to achieve in a single session and with lifelong results thanks to the development as the FUE technique, which is performed by the best hair health centers.

As you can see, beyond your alopecia and how developed it is, stop being bald is possible and you only need to go to a specialized hospital in this type of interventions to put a definite end.